Many children with specific learning difficulties such as dyslexia and autistic spectrum disorders have obvious difficulties with reading and writing that impair their performance in the classroom. These disabilities are often, and correctly, attributed to the processing problems that have been identified as part of their condition. However there are many cases when a child who has been identified as, say, dyslexic, experiences reading problems that are not in fact a consequence of those “dyslexic” difficulties that are usually identified with reference to a phonological processing deficit, but which result from an entirely separate (although often co-morbid) condition which, because it exists alongside the dyslexia, dyspraxia, ADD/HD or autism, can either be masked by it and therefore not addressed as a separate issue, or confused with it with the result that other aspects of the disability may be neglected. This condition is a visual-perceptual disorder variously called Meares-Irlen Syndrome, Scotopic Sensitivity, or simply Visual Stress. In many cases, unlike dyslexia or autism, it can be remedied by a very simple and inexpensive intervention: reading through a colored overlay that changes the color of the page.

A Colored Overlay made all the difference

“It was the most important moment of my life. For the first time in my life I could see text clear as glass. I was astounded…. All I could think to say was 'How did they do that?'”

The above quotation (from “Reading Through Color”, by Professor Arnold Wilkins, Wiley 2003) of the transformation of one teenage boy's experience through the simple procedure of changing the background color of the text he was attempting to read is in itself startling; but perhaps more significant still is the fact that this is not an exceptionally unusual experience. According to Wilkins, up to 20% of the population of the UK schools where he conducted his research suffered in varying degrees from visual distortions or discomfort associated with reading. The background to Professor Wilkins’s research, and the conclusions he draws, are described in detail in his book “Reading through Color”. Results, arrived at using a double-blind protocol, were consistent and measurable, and prove objectively that reading through a correctly selected colored overlay can significantly improve reading speed and comprehension over an extended time period.

One sufferer remembers how, as a child, she used to try and physically pin down the words with her hand as they kept appearing to jump off the page. What is consistent across the spectrum of people, especially children, who experience undiagnosed Visual Stress is that THEY ASSUME THAT THIS IS THE NORMAL READING EXPERIENCE. “ Reading is just not for me”, they say, and gradually fall behind their peers in an environment that says “ Reading is a must for everyone”. Written work is also affected as they have difficulty reading their own writing and are therefore inhibited in the processes of correct letter formation. And of course once the work is written down, often mis-spelt and written untidily, the Irlen Syndrome child is unwilling and often unable to access it and it is useless for learning. Frustration, loss of motivation, poor concentration and consequent disruptive behaviour all too often become the norm.

There is as yet no proven scientific explanation for Visual Stress, although many experts agree that the problem is visual-perceptual in nature, most probably originating in the visual cortex of the brain, arising from a deficiency in one of the visual pathways. There are two pathways: magnocellular (fast) and parvocellular (slow). One of the functions of the fast pathway is to inhibit the slow pathway when the eyes are moved, so that the image of what was previously looked at does not persist. Some scientists believe that in cases of visual stress, the fast pathway may be disabled to varying degrees, thus allowing an after-image to remain and interfere with perception, blurring letters, causing them to “move” etc. Bright, and especially fluorescent lights, and glossy white paper, exacerbate the problem. Another theory, called "Cortical Hyperexcitability", suggests that certain cells in the visual cortex are over-stimulated by specific wavelengths in the color spectrum. It would seem that filtering out some of the reflected white light by reading through a tinted transparent overlay has the effect of reducing or eliminating this over-stimulation, and stabilizing the image of the text .

Unlike Dyslexia, which is a distinct neurobiological difference and for which there is no “quick fix”, the effects of Visual Stress can often be easily and inexpensively remedied by the use of colored overlays or lenses. However, although color can often be the key, not any color will do. For each individual there is a specific hue (tint) and saturation (depth of color) that will “work” best, so it is important that a sufficiently wide selection of colors is provided so that everybody's needs are met. In some cases individuals requiring a deeper saturation “double up” two overlays of the same color to achieve the desired effect. Recent research by Professor Wilkins showed that an insufficient choice of colors reduces the effectiveness of the intervention as measured by increased reading speed in a significant number of cases. In response to this research, the number of tints in the Crossbow range was increased from five to ten. The correct color is arrived at by a simple process of elimination, whereby each color is compared in turn with a white page. If it is not apparent that a particular color makes the text clearer all the combined hues should be tried, as well as the deeper saturation arrived at by doubling up two overlays of the same color.

Although research and classroom experience has proved conclusively that the use of a colored overlay of the correct color can do much to increase the reading speed, comprehension and comfort of many children, a significant problem still remains: a sheet of colored acetate (or similar material) covering the page is a fairly obvious and intrusive intervention that make it clear to the rest of the class that the child in question is experiencing difficulties. The older the student, the less welcome this is going to be.

With this in mind, Crossbow Education have also developed and patented a more user-friendly application of the colored overlay principal called the Eye Level Reading Ruler. The Eye Level Reading Ruler is a 2.5” deep plastic strip with tinted transparent edges and an opaque central area that allows the reader to read through the color of their choice while tracking the line with the edge of the central opaque strip. 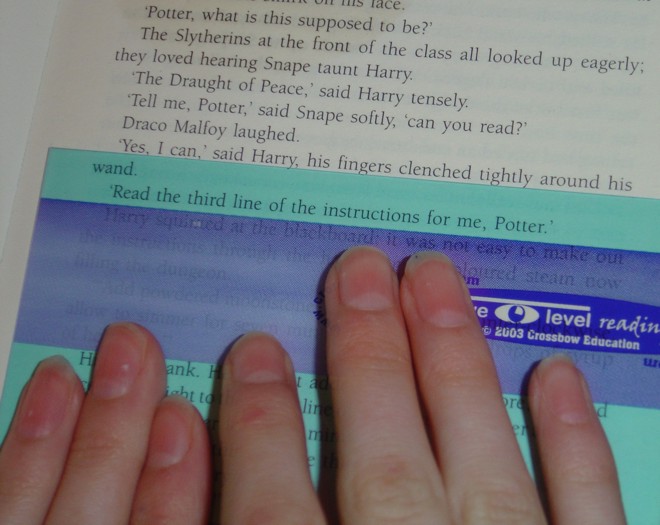 Because the Reading Ruler can slip into a pocket or pencil case, or even remain inside the book as a bookmark, it does not carry the “Special Needs” stigma of a full size colored overlay. In many schools teachers keep a selection of reading rulers on their desk or in a common resource area, and children - not always those with reading difficulties, either- just help themselves to “their” color at will. About 60% of schools in England now use Eye Level Reading Rulers as part of their intervention strategy for students with reading difficulties.